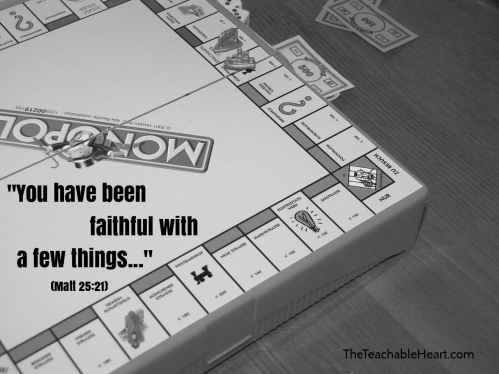 “That will be $450 please,” she said with a satisfied twinkle in her eyes.  I had just rounded “Go” and needed the $200 for doing so, when I landed on Amy’s little purple property and had to fork it all over to my future businesswoman-of-the-year.  Just the previous time around the board I had landed on that “worthless” piece of property called “Mediterranean Avenue” and had to dish out $250 of my hard-earned bucks to my then 9-year-old real estate tycoon.

Earlier in the game, she had set her sights on “Park Place” and “Boardwalk” (one of which I owned, the second owned by another player).  Initially, Amy was crushed when other players had landed on those prize pieces.  However, later, after she had purchased Baltic and Mediterranean and built each property up to its maximum rent potential, Amy made what I thought was a pretty profound observation.  Not in a proud or boasting manner, she said, “Baltic is better.  And I’m making more with Mediterranean.  Dad, you can only make $50 with Boardwalk, but here I am making $450 with Baltic when it has a hotel on it.”

There I sat with the most expensive property on the board unable to do much with it, while she had taken the two least expensive properties and was being very successful.  Making the most of what she had.  Isn’t that a lot like life?  We set our sights on obtaining only the best.  We want to get the best stuff, make the most money, be recognized and rewarded.  Unfortunately, this can also be true regarding our roles within the church.  Many of us clamor for the “spotlight” areas of ministry.  We want to preach, speak, teach, sing, head this committee or that committee – things that get noticed.  Face it; in our human nature, we want Boardwalk and Park Place.

But more often than not, we’re given Baltic Ave – those “behind-the-scenes” opportunities that others may not take notice of, and we question if we’re making any difference at all.  Things such as serving in the kitchen, changing diapers in the nursery, or emptying the trash cans.  Maybe your ministry right now is raising your children.  Preparing them three meals a day, giving baths, washing load after load of laundry, reading bedtime and Bible stories, instilling God’s word into their little sponge-like minds.  Be assured that as we are faithful with these tasks, God blesses those efforts and produces fruit.

Remember, as you roll the dice and move yourself around the game board of life, sometimes Baltic is better; make the most of your Mediterranean.  God sees what nobody else sees and He will faithfully reward you for your efforts. –Dave

“His master replied, ‘Well done, good and faithful servant!  You have been faithful with a few things; I will put you in charge of many things. Come and share your master’s happiness!’  (Matthew 25:21)

(To receive these free daily devotions via email, subscribe at:  http://www.theteachableheart.com/blogs—daily-devotions.html)