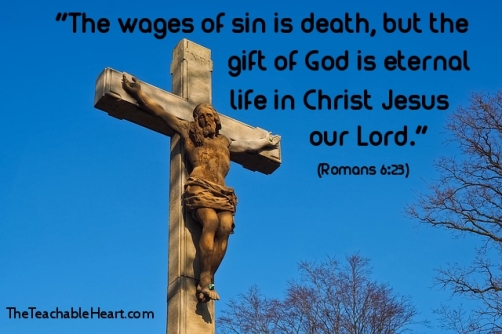 Those were my nails; that was my crown,
That pierced Your hands and Your brow.
Those were my thorns, those were my scorns;
Those were my tears that fell down.
And just as You said it would be,
You did it all for me.
After You counted the cost,
You took my shame, my blame…
On my cross.

For several years, our church held a Good Friday service, and I was asked to sing “On My Cross” (by FFH).  The chorus above always reminds me that what Christ suffered, He suffered for ME.  I was the one who deserved the Roman flogging – commonly called “the halfway death” because many died from it alone.  It was my flesh that should have been torn by the whip that had bone and glass woven into it.

I was the one whose sin and shame deserved punishment; I was the guilty one – not the Son of God.  The 150-pound patibulum (the horizontal beam of the cross) should have been placed upon my shoulders.  It was my face that should have hit the ground as I fell while carrying that cross.  My wrists and feet should have felt the piercing of the nails.  My ears should have heard the sneers from the crowd.  It was MY shame.  It was MY blame that Jesus bore upon MY cross that day.

Our sin racked up a debt we could not pay, so Christ paid it for us.  The Son’s death atoned for the sin of man, and satisfied the just wrath of the Father.  Jesus suffered and died once for all, so that all may experience life everlasting.

This Easter, take the time to personalize the suffering that Christ endured.  Remind yourself that what Jesus did – He did for YOU.  Those nails and that cross were yours and mine. Your life is not your own, you were purchased at a very high price!  –Dave

Then he released Barabbas to them. But he had Jesus flogged, and handed him over to be crucified.  (Matthew 27:26)