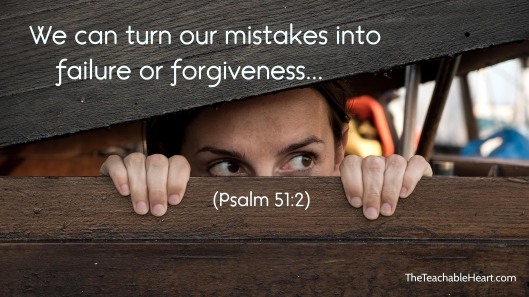 “Honesty is the fastest way to prevent a mistake from turning into a failure.”  (James Altucher)

I have no idea who Altucher is, but, like you, I know the truth of his words above!  How many people have been destroyed – not by their initial mistake – but by the later efforts to cover that mistake up?!  How many jobs have been lost because an employee chose to cover up a mistake versus acknowledge it and ask for help correcting it?

It’s a tough reality isn’t it?  Despite our best efforts, we cannot prevent making mistakes now and then.  Yet, none of us want those mistakes aired for public viewing…so, what are we to do?  Everything within us wants to cover our errors and pretend they don’t exist; but, as Altucher says, that’s a very fast track to actual failure.

A quick survey through Scripture reminds us that cover up attempts never turn out very well.  Ask David how his cover-up efforts with Bathsheba went.  Or Moses and his attempt to bury the Egyptian he killed in the sand.  Judas’ “secret” sign of betrayal didn’t work out, and the Samaritan woman living with her 5th “husband” couldn’t keep that fact hidden.

Yes, sin needs to be covered – but not by our efforts to hide them, but by the blood of Jesus that washes them away.

What is your typical response to your own shortcomings, mistakes, or sin?  Do you attempt to hide them form others?  Or do you take them to God?  One response leads to failure; the other leads to forgiveness.  The choice is ours. –Dave

Wash away all my iniquity and cleanse me from my sin (Psalm 51:2).