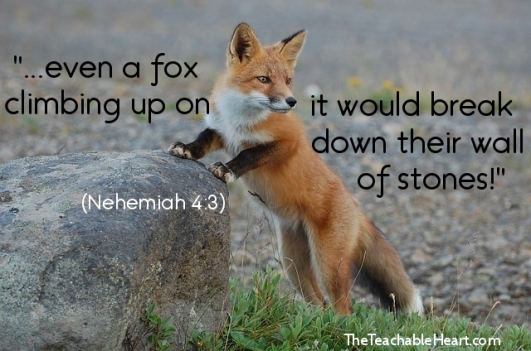 Have you ever known anyone named Sanballat or Tobiah?  Me either; but Nehemiah sure knew them!  To refresh our memories, Nehemiah was the man God used to rebuild the walls of Jerusalem after the Israelites had been hauled off to exile in Babylon.  Nehemiah was the cupbearer to the King (Artaxerxes) and secured the king’s help to rebuild Jerusalem.

With the king’s blessing and the king’s provision, Nehemiah returned to Jerusalem and began rebuilding its wall.  And that’s when Sanballat and Tobiah showed up with these “encouraging” words:

“What are those feeble Jews doing?…What they are building—even a fox climbing up on it would break down their wall of stones!” (Nehemiah 4:2-3)

The task before him was difficult enough, the constant taunting by these guys only made it harder.  You’ll notice that these naysayers criticized the people themselves (calling them feeble) and the work they were attempting (even the weight of a dainty little fox would be too much for their wall to withstand).

Have you been there?  Taunted and criticized for attempting to faithfully follow the Lord?  Don’t convince yourself that your efforts will be celebrated by the masses – they likely won’t be.  Yet, we can learn a wonderful lesson from Nehemiah’s response to his critics.  First, he took his concern to God:

Then, he rolled up his sleeves and built the wall anyway!  He would later describe the effort this way:

So we rebuilt the wall till all of it reached half its height, for the people worked with all their heart. (v.6)

Friends, when God asks you to do something, throw your heart all the way into it, and the criticism of others all the way out!  –Dave