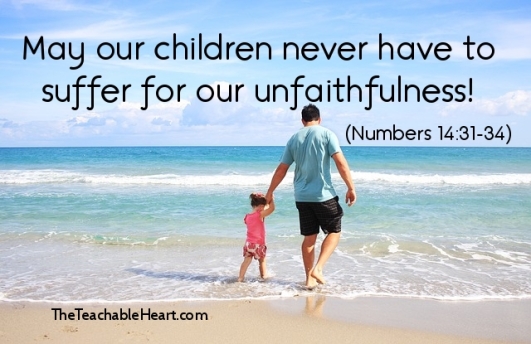 As for your children that you said would be taken as plunder, I will bring them in to enjoy the land you have rejected.  But as for you, your bodies will fall in this wilderness. Your children will be shepherds here for forty years, suffering for your unfaithfulness, until the last of your bodies lies in the wilderness.  For forty years—one year for each of the forty days you explored the land—you will suffer for your sins and know what it is like to have me against you.’  (Numbers 14:31-34)

It’s one of the sadder statements in Scripture.  As we’ve studied earlier, the generation of Hebrews which Moses led out of Egypt had come to the doorstep of the Promised Land and refused to enter it.  Their reason?  They feared the giants occupying the land would steal their wives and children away from them.

God’s response to their fear-driven disobedience is very clear.  What they feared would happen to their children wouldn’t.  Their children would actually enter the land safely.  But, not immediately.  Instead of going in and enjoying that land flowing with milk and honey right away, those kids would have to work as shepherds in the desert for 40 years!

Scripture spares no punches here – the children would suffer because of the parents’ unfaithfulness.  Here again I point no fingers at those parents.  I wonder how my own children have suffered because their father struggled with his own faith.  Did I make following Christ less appealing because of my own disobedience?  What chances might I have encouraged them to take if I hadn’t succumb to my own fear?  Would my children be different people today if I had exercised more faith in, and obedience to, God when they were younger?

The truth is, I’ll never know.  But I do know that from this day forward I hope that they will never again suffer from my own faithlessness.  How about you?  Will you strive to never again bring suffering to those you love because of unfaithfulness to God?