Korah’s Rebellion, and Ours

Posted on September 30, 2019 by The Teachable Heart 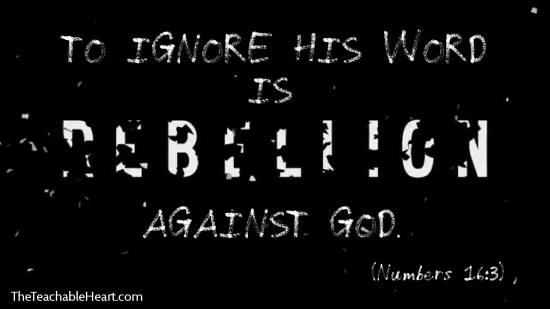 Many of us aren’t familial with “Korah’s rebellion.”  Korah was a first cousin to Moses and Aaron, and perhaps it was this familiar closeness that led to Korah’s jealousy.  We’re not told, but here’s how Scripture records Korah’s issue:

“You have gone too far! The whole community is holy, every one of them, and the Lord is with them. Why then do you set yourselves above the Lord’s assembly?” (Numbers 16:3)

Korah was ticked because only Aaron’s family were  allowed to be priests; God had said so in Numbers 3 and 4.  But Korah wasn’t content with that, so he argued that every single Israelite should be given the same right.

Moses responded, “It is against the Lord that you and all your followers have banded together. Who is Aaron that you should grumble against him?” (v. 11).  Moses reminded Korah that God made the rules.  Aaron’s family were the only priests solely because that’s the way God said it would be.  To fight against Aaron was to raise a fist to God.  As a result, the earth opened and swallowed Korah alive.

To the best of my knowledge, this was the first and only time God exercised His judgment this way.  But it’s far from the last time men rebelled against God.  You see, Korah’s rebellion is really our rebellion as well.  Korah’s mistake was to exert his will against the spoken word of God.  In essence, when the Lord had said, “Go right,” Korah said, “Nope, I’m going left.”

Korah and his kin were killed because they despised the Lord by not accepting His word.  Will the earth swallow us alive if we do likewise today?  Probably not.  But this story reminds us of how seriously God takes our submission to His Word.  Do you  willingly accept ALL of God’s spoken Word?  Or do you pick and choose the parts you want to follow?  –Dave