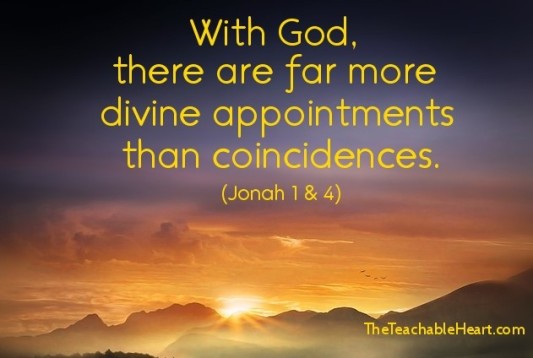 We may call them “coincidences” – and perhaps some of them are.  However, with a sovereign God orchestrating the events of our lives, we must consider the possibility that He’s more involved than we may think!

For instance, consider the familiar story of Jonah. We know the gist of it.  The command from God, the running of Jonah, the swallowing by the fish, etc.  But as I read it again, I noticed a recurring theme.  At least four times in as many chapters, it recurs.  God APPOINTED the fish (1:17), He appointed the plant which shaded Jonah (4:6), He appointed the worm which killed the plant (4:7), and the Lord appointed the scorching wind to get Jonah’s attention (4:8).

In each instance the same Hebrew word was used, and it means “assigned to a place” by someone in authority.  More specifically, it carries the idea of being assigned to a place in order to serve the one who gave the assignment.

In Jonah’s life, the fish, the plant, the worm, and the wind were each personally assigned to be in specific places at specific times in order to serve the purposes of God.  Friends, God often works through the common, mundane things of this world.  But He does move through them!

For a child of God, there are far fewer coincidences and far more divine appointments than we realize.  A chance encounter at work.  A flat tire on the way home.  Dialing the wrong number.  Being called into the principal’s office.  Each day is likely filled with His divine appointments – IF we’re willing to look at them that way.

What divine appointments might He have in store for you today?  –Dave

Now the Lord had appointed a huge fish to swallow Jonah…(1:7)